This is the final part in a series of articles which has counted down to revealing what game was voted as the 2011 USCL Game of the Year. For more information on exactly how this process worked and the prize information, please refer to: Game of the Year Contest 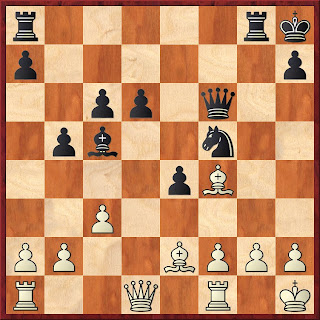 After a somewhat uncommon opening, GM Khachiyan kept the game interesting with the strong exchange sacrifice 20... Rxg2! and eventually emerged on top


Below are the comments from the judges on why they ranked the game where they did and in parentheses is the ranking given by that judge and the number of points awarded for that ranking.

FM Ron Young (1st Place, 20 points): A very elegant, well-conducted game that shows just how little White has to do to lose to the Schliemann. It even seems that the less White does, the easier for him to lose. For regular sufferers from the "Spanish torture", the final position with White's Bishop trapped on e8 was a bit of second-hand revenge.

FM Victor Shen (1st Place, 20 points): It was extremely difficult for me to pick a winner this year - among my top three choices, I felt like I could give any of them the top spot based on different criteria. But I'm going to nominate this game as GOTY for several reasons. One, it was an interesting opening - Chirila deviated from Anand vs Ivanchuk 2011 (improving on a World Champion's play!?) with 10. Nh4 instead of c3. Of course, Khachiyan then took advantage of this to play 10... Nd4, centralizing the Knight and gaining a tempo. He then had to play very accurately to ensure it wouldn't just be kicked out immediately. 15... f5! followed by the nice 17... e4! gave him the initiative and good practical chances. Chirila's natural 19. Bf4 instead of Bd2 allowed Qf6! forking both the b2 pawn as well as the g2 Pawn (!) preparing an exchange sacrifice. For the exchange, Black got a Pawn, an exposed White King, a weak Pawn on f2, harmonious piece play and a strong e-pawn. It was still unclear after this exchange sacrifice, and following an exchange of Queens, White would probably have had good drawing chances had he played 27. Bxc6 instead of Rae1. As it was, this allowed for a decisive repositioning of the Black Knight to e5, from where it dominated the White Bishop. The final touch, Kg7-Kh6, taking away the White Bishop's last escape square was quite beautiful. Overall, a fantastic game by Black, combining subtle tactics and positional mastery. The fact that Chirila only really made one mistake the whole game, and a natural move too (27. Rae1?) underlies the class that Khachiyan showed.

FM Alisa Melekhina (2nd Place, 19 points): As a fan of sidelines, I was rooting for this Schliemann, especially with the daring 20… Rxg2! Unfortunately, White could have made Black's life more difficult by following through with 27. Bxc6 instead of playing right into his hands with 27. Rae1. Chirila was not given a second opportunity to recover, and the game culminated in a noteworthy victory for Khachiyan when White's Bishop was unexpectedly snared. I would like to see more main-line deviations from both colors in future USCL games.

FM Ingvar Johannesson (4th Place, 17 points): Khachiyan played the increasingly popular (thanks to Radjabov I guess) Jaenisch Gambit against the Spanish. Black emerged with no problems from the opening and seemed to be slightly preferable from about move 16-19 when he suddenly changed the course of the game and took over with the eye pleasing 20... Rxg2! A classical exchange sacrifice giving Black complete control over the dark squares and White a weakened King position. I really like the domination of the dark squared Bishop + Knight vs light squared Bishop + passive Rook. Even with all this fancy stuff, White was still in the game fighting and probably had to try and get active with 26. a4 (27. Bxc6 also seems like a better try). Instead White allowed Khachiyan a cheeky finish trapping the Bishop on e8 with the maneuver Kg7-h6 blocking the last escape square on h5 and forcing resignation. I think Black‘s play was very nice and thematic, but White could perhaps have fought better in some places.

GM Alex Lenderman (7th Place, 14 points): Exchange sacrifice was one of the biggest trademarks of the 9th World Champion, the great Tigran Petrosian, and Melik surely must've done his homework on looking at his games and now exchange sacrifices seem to be Melik's trademark as well, which I myself have experienced first hand in the US Championships in 2010 when I was on the losing side.
That aside, 20... Rxg2 was very nice, and Black all in all won a decent game. However, White played a little bit dull in the opening, seems like he did not know the line very well and played the rare 6. Bg5 which doesn't seem to give much and hasn't produced very good results. Black outplayed him nicely with logical straight forward moves followed by the Rxg2! shot. However, the main reason why the game missed my Top Five was because Black seemingly slipped up a clearly better game.
For example, 23... Rf8 seems to be inaccurate due to Qg4 forcing the Queen exchange. Instead 23... d5! 24. Qg4 Qf6 would maintain an edge because White also has to worry about a bad King while Black is completely safe, and the Bishop on h5 would be tied up. As the game went on, White instead of 26. Be8?! (it should guard the e2 square), 26. a4! was a nice opportunity for a counterplay since on 26... b4 27. cxb4 followed by Rac1 with pressure on c6. After a4, the position seems unclear, and Black has to play accurately to maintain the balance.
After the logical 26... e3, White lost control with 27. Rae1? as instead 27. Bxc6 e2 28. Rxf2 Rxf2 29. Kg1, White was still in the game. e1 was simply a poor square for the Rook. After Black repositioned his Knight to e5 and consolidated everything, the game was pretty much lost as White was left without counterplay with all his pieces tied up. Decent game, but really nothing super special, White didn't play very well both in the opening, in the middle game, and missed his chances in the endgame, and it wasn't completely perfect from the Black side either.


Game of the Year Final Standings:

wow first/second won by a lot

Just wanted to leave a comment thanking Mr. Lenderman for the wonderful writeups. A three paragraph essay for every game, that's really above and beyond.

Thank you, Anonymous! It was my pleasure. I honestly think I made quite a few judgemental mistakes here but I'm just happy that they didn't really majorly affect the contest; primarily the top 5 winners. On a side note,I liked some of the other people's rankings more than mines.