Week 10 Game of the Week

This year we have five judges for Game of the Week, each ranking their top five games. The games are then given from one to five points, based on these rankings, and whichever game receives the most total points wins the award. First place each week will receive a $200 bonus prize ($150 going to the winner of the game, $50 to the loser), second place $75, and third place $50 (both second and third going entirely to the winner). Our five judges are: IM Greg Shahade, FM Jim Dean, NM Michael Aigner, NM Jeff Ashton, and NM Arun Sharma. Click here for more details. 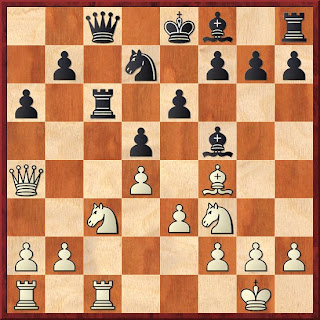 SM Sammour-Hasbun threw a wrench in the normally sedate opening with 13. e4?! and eventually used his tactical prowess to get the best of the complications, knocking New York back to the fourth seed.

Jim Dean (1st place, 5 points): For the second week in a row I found myself really enjoying Sammour-Hasbun's play. The double pawn sacrifice is not a novelty, but it was handled beautifully by White and definitely makes the Exchange Slav more spectator-friendly. The final position is a real show of dominance by the White pieces.


Michael Aigner (1st place, 5 points): This week was another wild game that has been Sammour-Hasbun's trademark. Quite a few moves simply shocked me... is this even legal!? I doubt very many mortals would have come up with 13. e4 and 15. d5. Rybka doesn't predict all of these moves, but the program understands most of them given a little time. Simply amazing, and worthy of Game of the Week!


Arun Sharma (2nd place, 4 points): For a game which started with an opening so tame in nature, it's quite amazing what ended up transpiring, but it doesn't surprise me that the victor of such a game would be someone with the tactical prowess of Sammour-Hasbun. Starting with the Pawn sac with 13. e4 until the end of the game, it was essentially interesting at every moment, with Jorge throwing tactic after tactic at Kacheishvili until the latter eventually succumbed. A great game and definitely a worthy winner even if I happened to like one game more than this one.


Jeff Ashton (2nd place, 4 points): Creative play out of the opening with a nice finish at the end.


Greg Shahade (2nd place, 4 points): Normally this would be an easy choice for Game of the Week, although this week I preferred another game (Akobian vs Shulman). Honestly to me this game and the other were very close in value, but the fact that Akobian's win sent Seattle to the playoffs, while Boston's playoff position was already cemented and so the win had a lot less value (although it did mean that New York gets the fourth seed instead of the third). 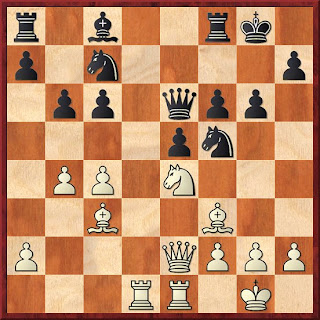 Arun Sharma (1st place, 5 points): Very complete game by Akobian from the opening stage to the middlegame tactics and the finishing touch 38. Red5! that effectively ended things. Beating such a strong player in such convincing fashion is always an impressive accomplishment. I too am curious how this game might fare in the Game of the Year Contest in particular in comparison to this week's winner.


Greg Shahade (1st place, 5 points): A great game by Akobian against a great opponent. As stated already, the importance of this game for the Sluggers in a win or go home match, led me to choose it over the Sammour-Hasbun vs Kacheishvili game. I think both games have a great chance for success in the Game of the Year contest however.


Jim Dean (3rd place, 3 points): Certainly not a surprise for this game with two very high level players to get a lot of votes. Akobian got the White pieces for the second time in a row and seemed to be in control from the early middlegame until the finish. This game didn't excite me quite as much as the first place winner, but it seemed comparable in terms of quality. 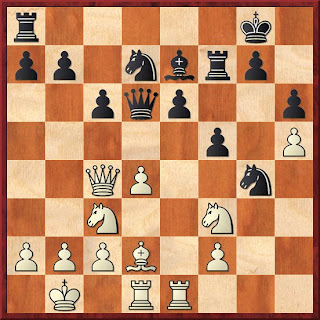 A IM Shankland sacrificed his Queen for two Rooks with 19. Nxf2! and eventually got the better of the complications, leading New England to achieving an unprecedented 9.5 - 0.5 record.

Michael Aigner (2nd place, 4 points): This wild Caro Kann game (not an oxymoron!) features a quasi Queen sacrifice where Black eventually gets two Rooks for the Lady. What impressed me the most was the depth of the h-pawn concept, from 30... h5 to 40... Rh7. Maybe the game was imperfect (24... Nf6 was superior to Nf8), but few humans can match the machine in a game like this.


Arun Sharma (4th place, 2 points): Interesting game. I really wasn't sure of the objective merits of the position during the sacrificial stage started by White with 15. g4?!, but it seemed like Shankland handled it really well, in particular his choice to liquidate into the Queen vs two Rooks position and in the way he handled the ending, winning seemingly effortlessly.


Jim Dean (4th place, 2 points): I'm starting to think Shankland is pretty good at handling material imbalances. In this game, I really liked how the side with the Queen seemed to be the "slower" side and didn't have much else to do but Pawn grab while Black's passer zoomed up the board. Congrats to Shankland on another big victory with Black in the USCL.


Greg Shahade (NR, 0 points): A strong game by Shankland, as Sam has really picked up steam in the second half of the season. He made it look easy as New England rolled to a new league record of 9.5 - 0.5 in the regular season. This game made my lists of finalists but didn't quite make my top five.

Now you pick the wrong Kacheishvili game? And some don't even rank the Milman victory? Very interesting.

While I agree with most of the judge's comments about the top two games being at a very high level,I do have a bias for Var's game that is not mentioned. I believe Var's game to be of theoretical importance and the whole concept of Nd2 --> Ne4 and the breaking down of the dark squares to be quite attractive.

I dunno, there was something more sexy about Jorge's game than Var's. It looked less scripted, his double pawn sac while at first looking unsound was practically hard to defend against. Kach's Qc8 is probably a lemon and will not be repeated in the future.