Quarterfinals Game of the Week

This year Game of the Week will be decided upon by IM Greg Shahade and NM Arun Sharma together. First place each week will receive a $200 bonus prize ($150 going to the winner of the game, $50 to the loser), second place $75, and third place $50 (both second and third going entirely to the winner). 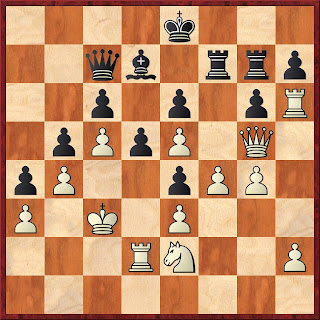 GM Shulman completed his nice King walk with 52. Kd4!, and shortly afterward broke through decisively on the Kingside

A very dominating positional effort by Shulman, just achieving a nice bind with good Knight vs bad Bishop and then capitalizing on it very patiently. Topping it off by unusually using his King to ensure a blockade of the center before crashing through on the Kingside made this game a very attractive choice in our eyes. Just on the whole it was a very nice effort by him which obviously was crucial to the team effort as this was the game which secured a drawn match to send Chicago to the Semifinals. 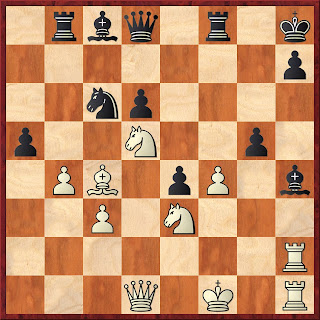 The somewhat strange looking, yet powerful 25. Ke2! proved to be a very effective shot as IM Esserman quickly scored a brutal win in this tricky line.

While a good portion of this game is theory, and the result wound up being for naught for the team, it was still a very nice performance by Esserman, basically playing a flawless game and winning in such quick fashion against a very strong player.

Note to anyone who attempted to make a comment recently that hasn't shown up: the intent behind banning anonymous comments this year was so that anyone who expressed their opinion (whether positive or negative) would have to take responsibility for their comments.

That being so, there have been a number people this year who have made a google account and used a fake name or no name at all to post - essentially doing that to try to circumvent the anonymous ban. Just a note to all such people (or to any who might have the urge to do the same thing), I wouldn't bother trying it. Either make it clear who you are when you post a comment, or your comment will never see the light of day.

it's no fun without the crazies

This BS is a HUGE reason why I left the League. Good riddance.


Please note, this is the first time I've ever posted anonymously.

Agree
The Yury Shulman game was already completely winning and I think that Kd4 was an obvious move/ completely normal move while Ke2, I did'nt notice in the first place.